We are one of the few companies in Styria that offers organic Styrian pumpkin seed oil g.g.A. This is pressed using the tried and tested production procedure. It is a unique combination that can be savoured in the exceeding high quality of our organic pumpkin seed oil. In addition to the traditional stone mill, the freshly ground pumpkin seeds are also roasted by hand in a pan on a wood-burner – with a lot of care displayed by the presser.

What is more, cooperation with Austrian farmers is of particular importance and takes top priority. Organic products are not commodity products – a lot of understanding and feel for the wonder of nature is required from the moment the pumpkins are cultivated up until they are harvested, and they also require a lot of hard work. Being organic farmers ourselves, we know this from personal experience. However, nearly every year the harvest compensates for the time and effort we have invested and the result is the organic pumpkin seeds that are characterised by their high quality.

We also guarantee that we consistently monitor the organic origin of our pumpkin seeds. This is checked by Austria’s independent verification, testing and certification company “SGS Austria”. This company not only checks the origin of the pumpkin seeds, it also supervises our production procedure – from the grinding of the seeds to the filling of the bottles. If it says “organic” on the outside of our products, then that is exactly what is on the inside. 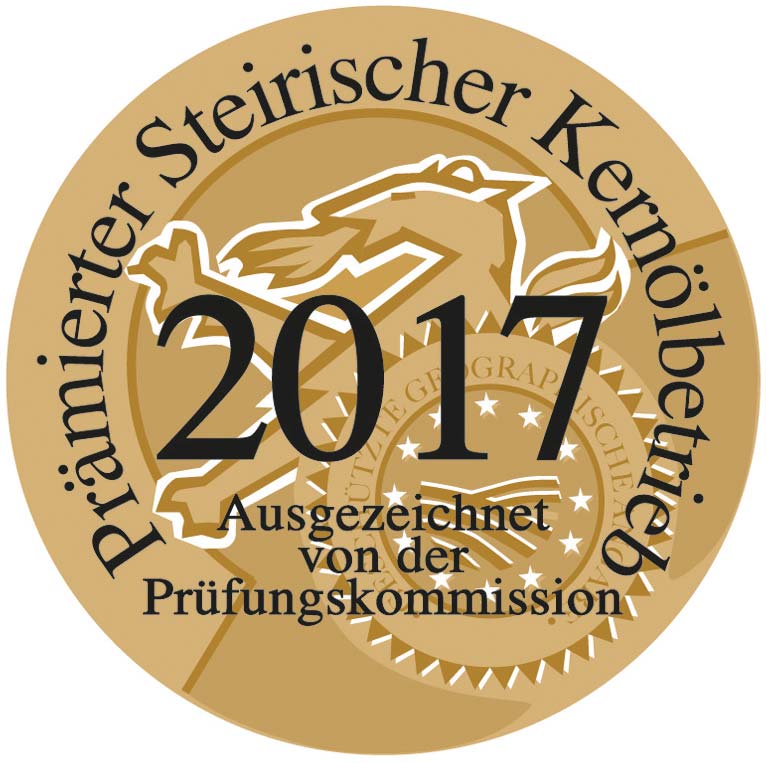 Following the awards from 2013-2015, our organic Styrian pumpkin seed oil g.g.A. once again received the award “Commended Styrian Pumpkin Seed Oil” (Prämiertes Steirisches Kürbiskernöl) in 2016. In 2016 we received a total of four medals from “Genuss Magazin Öl Award 2016”. The French agency for the development of agricultural products awarded us a bronze medal.

Alongside the standardised sensory quality criteria, the chemical and physical composition is also examined and we have received outstanding results. The evaluation is according to international standards and was supervised by the Dr. Wagner Institute (Institut Dr. Wagner). [/tab] [tab title=”The production procedure”] At the end of April or the beginning of May the seeds used for the Styrian Oil Pumpkin (Cucurbita pepo var styriaca) are sown in rows in order to make repeated mechanical hoeing between the rows possible. Depending on the weather, harvesting takes place between the middle of September and the middle of October using agricultural machinery designed and developed especially for this purpose. The pumpkin seeds are washed and dried, and fragments of husks are removed immediately after they have been harvested. The fully ripe, bulbous and dark green pumpkin seeds are a prerequisite for high-quality Styrian pumpkin seed oil g.g.A.

On account of its high protein content, the residue of the mash, the so-called “Ölkaas” (pumpkin seed cake), is, after pressing, used in the form of cake or flour as animal feed. Furthermore, experts use it as well-tried fish food or bait.[/tab] [tab title=”History”]

The pumpkin plant is one of the first plants in the world to be cultivated by mankind. The earliest common pumpkin (Cucurbita pepo) was found by scientists around 10,700 to 9,200 B.C. The pumpkin originally came from southern Mexico and presumably found its way to Europe after America was discovered. These pumpkins were so-called “pumpkin seeds encased in a shell” and are still cultivated in many regions of the world today. There are many varieties of pumpkins – one kind is the Cucurbita pepo var styriaca, the so-called Styrian pumpkin seed without a shell.

The Cucurbita pepo var styriaca resulted from natural mutation more than 100 years ago. The biggest advantages of the Styrian pumpkin seed are its relevant high-quality substances and characteristic features which you can read about in the section “Health”.

Today the oil pumpkin without a shell is grown in Styria and in some regions of Austria that have a favourable climate. However, we only use the very best pumpkin seeds in our Styrian pumpkin seed oil g.g.A. This outstanding quality is instantly identifiable to our customers by its white and green insignia.[/tab] [tab title=”Health”] Our Styrian pumpkin seed oil g.g.A. does not only taste superb, it is also particularly rich in anti-oxidants. These “free radicals” are highly reactive substances which play a role in the development of diseases. In contrast to other edible oils, the pumpkin seed oil is especially rich in anti-oxidants which can make the “free radicals” harmless (this has been supported by scientific studies, such as those of Gilbert Fruhwirth and Albin Hermetter from the University of Graz).

The fat in the pumpkin seeds is one of the most valuable vegetable fats, because approximately 80% of the fatty acids are unsaturated – 50% of them are actually poly-unsaturated. The Styrian pumpkin seed oil contains valuable ingredients, in particular vitamins A, B1, B2, B6, C, D and above all the important vitamin E (approximately 56 mg in 100 g of Styrian pumpkin seed oil), as well as valuable trace elements. [/tab] [/tabgroup] [divider width=”medium”]